When it comes to mapping the territory of academic philosophy, “the time-worn analytic-continental divide must be replaced by a tripartite division between the analytic, continental, and philosophical programs of science.”

Given the controversy over the nature and utility of the analytical-continental distinction, the authors asked whether “other divisions might be more informative.” They used cluster analysis of data collected by Academic Philosophy Data Analysis (APDA) to examine:

In machine learning, cluster analysis is any method that arranges the units of analysis into subsets—that is. clusters – based on some measure of similarity between the variables that characterize them… In the current project, the units of analysis are philosophy Ph.D. programs and the variables that characterize them are summarized by (1) the areas of specialization (AOS) of their Ph.D. graduates and (2) the responses to the “keyword” survey. Recall that survey respondents are asked to select keywords that distinguish their Ph.D. program. We hypothesized that if the analytic-continental divide existed at the department level, it would create patterns of association between these AOS and keyword variables and thus programs would cluster along this divide.

Although there is a distinct division in the field that can be described as mirroring the analytic-continental divide, there is considerable overlap between the two sides of this divide. This may be due in part to the fact that historical and pluralist programs tend to include both traditions. Furthermore, dividing the field into three groups provides a better overall group structure according to at least one measure; in this picture, philosophy of science differs from both analytic and continental philosophy.

The team tried their analysis with PhD programs sorted into multiple clusters, from 2 to 10 clusters, determining that data points were “better clustered” when limited to 2 or 3 clusters. The following figure (a modification of their Figure 3) shows the cluster structure when the programs are sorted into two clusters (part a) and three clusters (part b):

In (a), cluster 1 (blue) includes 87 programs and cluster 2 (yellow) includes 40 programs. Here are the positive trait keywords for Cluster 1: Analytical, Natural/Empirical, AOS Mind, Mind, and Logic/Formal. His negative traits are: Continental, Phenomenology, AOS Continental, Critical Theory, and German. In cluster 2 (yellow) of (a), these traits are reversed: the positive traits for cluster 1 are the negative traits for cluster 2 and vice versa. The authors write: “based on these features, this grouping appears to correspond to the analytic-continental divide.”

Regarding (b), the authors say:

Here is another color-coded visualization of the clusters as indicated in (b) above. In it, “each point represents one program… Averaged over all pairs, the Euclidean distances between these points roughly equal the correlation distance between the programs used to construct the clusters”: 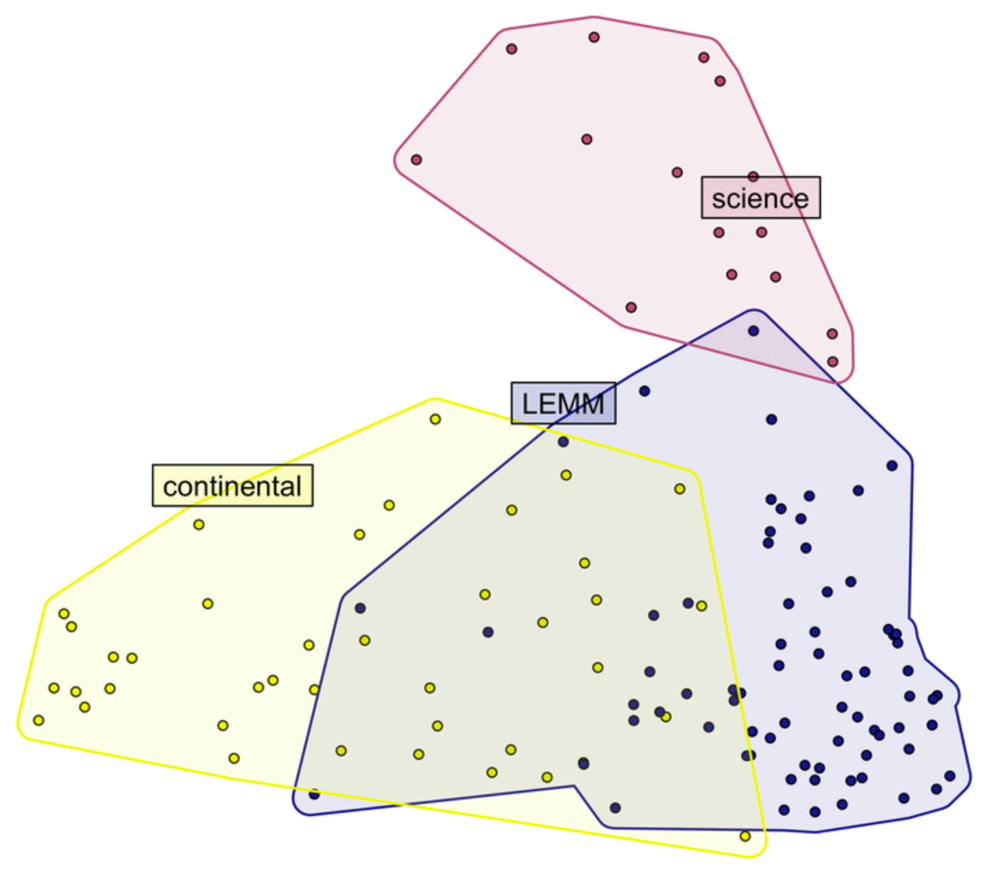 This three-way split provides a better overall grouping structure than a two-way split and sheds light on what is a highly unified set of programs—the philosophy of science group has minimal overlap with the analytic and continental groups and should be considered a separate entity.

Further analysis by the authors shows that the continental grouping depicted in yellow in the above figure is in fact characterized by “substantial heterogeneity”, evidenced in three subgroups:

One, with 15 programs, has the same features as [overall] “continental” cluster. The second cluster (17 programs) has the traits Historical (1.26), Medieval (1.16), AOS 19th/20th (1.04), AOS Medieval/Renaissance (1.00) and Religion (0, 93). And the third (8 programs) features AOS Applied Ethics (2.24), Gender/Feminist (1.87), Applied (1.40), Bioethics/Medical Ethics (1.27) and Political (0.97). To us, this set of clusters suggests that the label “continental”… may be an oversimplification. The [yellow] the cluster seems to include not only “mainstream continental” programs (phenomenology, 19th- and 20th-century French and German philosophy), but also work on the history of philosophy – especially the kind of historical work done in some religious programs, such as the University of Notre Dame and Baylor University, as well as a practical, applied feminist tradition. In summary, and in line with the discussion above, this cluster analysis suggests that there are multiple, somewhat distinct ‘non-analytic’ traditions in English-language academic philosophy.

You can read more about their methods and findings in the full paper here, which includes analyzes of the role of prestige and gender in the philosophy profession.