A replica of an ancient Chinese bronze tripod was displayed at the WAIC. With scanner and AI technology, the ancient Chinese characters of the tripod can be recognized and translated for modern readers.

These integrations are deepening thanks to the World Artificial Intelligence Conference, or WAIC, held recently in Shanghai, Shanghai Daily has learned.

A copy of the Bronze Tripod of the Western Zhou (1046-771 BC) was displayed at the WAIC. With scanner and AI technology, the ancient Chinese characters of the tripod can be recognized and translated for modern readers.

AI technology includes advanced optical character recognition, or OCR, and natural language processing, or NLP. Even in complex conditions, such as darkness and jagged edges, the signs can be automatically recognized, said Shanghai-based technology developer Intsig.

The technology can be used in organizing financial and legal files, online learning, telecommuting and scanning business cards, Inzig said. 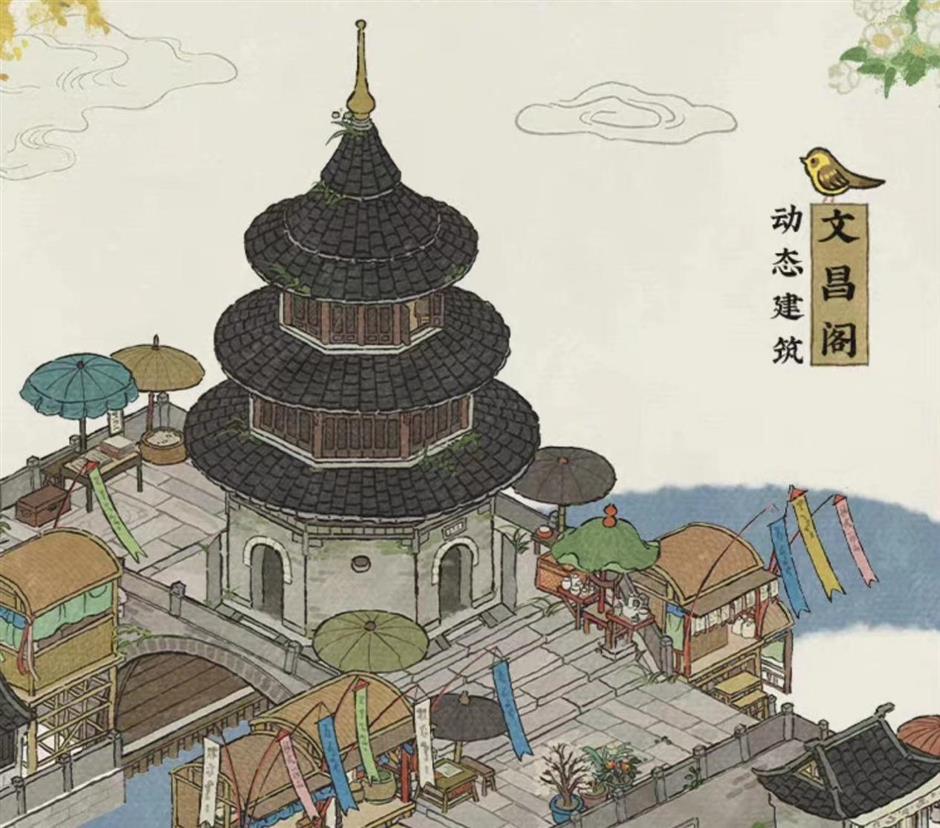 Also recently, new buildings, including shops for blush powder (脂粉), ancient Chinese cosmetics, debuted in the game “100 Views of Jiangnan”, a simulation game showing life and culture several hundred years ago in Jiangnan, or the lower reaches of the Yangtze Region on a river delta.

With a digitized in-game city of Yangzhou, one of the most prosperous cities in the entire country at the time, the game introduces ancient Chinese cosmetic skills to gamers, including many Generation X players.

Shanghai-based game developer Coconut Island has joined the time-honored brand Xie Fuchun, which was founded in 1830. They want to promote themed products and culture both online and offline in an integrated marketing way.

A model of Foguang Temple, a Buddhist temple built in 857 CE during the Tang Dynasty (618-907 CE), was on display at WAIC’s Xuhui Exhibition Hall.

With a history of 1,300 years, the UNESCO temple still stands on Mount Wutai in Shaanxi Province. It represents the “glory of ancient Chinese architecture” due to its long existence as well as its traditional and exquisite structures and techniques.

At WAIC, SenseTime uses AI and Augmented Reality or AR technology to reconstruct it with high-fidelity reconstruction in the virtual world.

The sweeping and majestic bucket arches allow people to feel the magnificent atmosphere of the Tang Dynasty. The site has a robotic arm that recognizes the user’s hand movements to go deep into the temple and explore its internal wooden structure.

It is an impressive “metaverse” style experience, especially when such travel to the mountainous region is not easy with strict pandemic control measures, said a visitor to the SenseTime booth.

Beyond integrations, these ancient Chinese wisdoms are now being used in high-tech firms spanning the AI, cloud and payment sectors. Artwork based on Dunhuang Cave Art is on display at the WAIC. Digital collecting is a booming sector in China.

Shanghai-based Huifu aims to offer an upgraded payment service for blockchain and metauniverse sectors, which are used in the copyright protection, brand value, consumer rights in culture and tourism, fashion consumption, sports and digital collections sectors.