Growing up in Yugoslavia, Tiana Raj knew that men wouldn’t mind her becoming a scientist—as long as she understood that there were limits to what she could achieve.

“It felt like, ‘OK, we’ll let you play the ball.’ But there was this glass ceiling that existed,” said Raj, director of the School of Molecular Sciences at Arizona State University.

Rajh’s experience is not unique. Women make up less than 30 percent of the world’s scientific researchers, according to UNESCO, and a report by the Professional Association of College and University Human Resources found that women hold the fewest senior administrative positions in STEM (science, technology, engineering , mathematics ).

ASU is changing that dynamic.

In the past 18 months, ASU has hired four women to lead units in STEM-related fields: Raj, Danieli, Patricia Rankin, chair of the physics department, and most recently Nancy Manley as director of life sciences (pictured above) .

It is important to note that ASU did not intentionally seek female candidates for these positions. Patrick Kenney, dean of the College of Liberal Arts and Sciences, said all four women competed against men in the selection process and were hired “because they’re all really big catches for us.”

“The first thing I think I should emphasize is that ASU has the best possible people,” Rankin said. “I don’t think I was hired because I was a woman.”

However, the four women acknowledge the importance of being in the positions they are in. Although they have different backgrounds, they said they all experienced sexism in some way in their formative years as scientists and were told — sometimes directly, sometimes indirectly — that their voices and ideas were not valued.

“You can be in a room and no one is listening, or you can say something and then have a male colleague say something similar and he’ll get recognition and credit for it,” Manley said. “It happens all the time. It’s just kind of pervasive. I was called aggressive for speaking up when men would otherwise be called proactive. So you just have to constantly fight against it.

“That women have been hired in these positions in fields that are considered predominantly male is very important to me.”

Now that they are the heads of their departments, the four women can fight against this long-standing bias. Equally important is the trickle-down effect their employees can create. 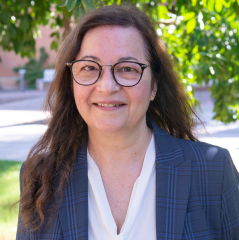 “We’re paying a lot more attention to try to develop a diverse faculty,” Raj said. “We’re struggling to show that they can do the job the same way the big guns (men) could.”

Female students also benefit. If all they saw in ASU’s STEM leadership were men, they would question the university’s commitment to diversity and their chance to become a department director or chair.

“When they’re mentored by a woman and they see women in those roles, they think, ‘Okay, I can go this high in science and math,'” Danieli said. “Maybe they didn’t get that message 30 years ago.”

“I’ve had male and female students tell me that women leaders matter to them,” Manley added. “So I know it matters.”

“We also want to encourage or at least get women thinking about the possibility of taking a leadership position,” Danieli said. “Women who have already walked this path can give insight into the challenges we faced and why we chose to do it.”

These are all wide-ranging, society-changing issues. Sometimes, however, the presence of women in leadership positions in traditionally male-dominated fields can be seen in small things. 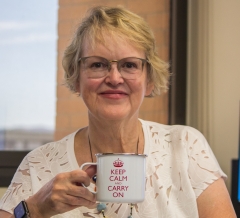 Rankin said one of the items on her to-do list after becoming chair of the physics department and hearing from female students was to make sure the women’s bathrooms were stocked with sanitary products.

“It might not seem like a big deal, but actually, when you’re stuck in a department doing three-hour labs, having somewhere close by for things like that is important,” she said.

There is still work to be done. According to the American Institute of Physics, only more than 2,000 female students earned bachelor’s degrees in 2020, compared to more than 9,000 male students. Rajh said 20-25% of faculty in the School of Molecular Sciences are women, while more than 50% of students are women.

ASU is looking to change those numbers — and as evidenced by the hiring of Raj, Danieli, Rankin and Manley — in a meaningful way.

“Once a problem is discovered, there’s a big, sustained push for change,” Raj said. “I think that’s the greatest thing about ASU.”

Top photo: Nancy Manley is the new director of the School of Life Sciences. She began her position on August 1. Photo by Charlie Leith/ASU News