Physicists love to smash particles and study the resulting chaos. Therein lies the discovery of new particles and strange physics, generated in fractions of a second and recreating conditions often unseen in our universe for billions of years. But for the magic to happen, two beams of particles must first collide.

Researchers at the U.S. Department of Energy’s Fermi National Accelerator Laboratory have announced the first successful demonstration of a new technique that enhances particle beams. Future particle accelerators could potentially use the method to create better, denser beams of particles, increasing the number of collisions and giving researchers a better chance to study rare physical phenomena that help us understand our universe. The team published their findings in a recent issue of Nature.

The beam’s particles emit ultrafast pulses of light as they pass through a special magnet called a pickup undulator (bottom right). Information about the energy or trajectory error of each particle is encoded in its light pulse. Light pulses are captured, focused and adjusted by various light optics. The particles then interact with their own momentums inside an identical kicker wavelet (center). The interaction can be used to cool the particles or even control them depending on the configuration of the system. Image: Jonathan Jarvis, Fermilab

Particle beams are made of billions of particles traveling together in groups called bunches. Condensing the particles in each beam so that they are packed tightly together makes it more likely that particles in colliding beams will interact—in the same way that several people trying to walk through a door at the same time is more likely to bump into each other than when walking across a wide open room.

Packing the particles together into a beam requires something similar to what happens when you put an inflated balloon in a freezer. Cooling the gas in the bubble reduces the random motion of the molecules and causes the bubble to contract. “Cooling” the beam reduces random particle motion and makes the beam narrower and denser.

Fermilab scientists used the lab’s newest storage ring, the Integrable Optics Test Accelerator, known as IOTA, to demonstrate and explore a new kind of beam cooling technology with the potential to dramatically speed up that cooling process.

“IOTA was created as a flexible R&D engine for accelerating science and technology,” said Jonathan Jarvis, scientist at Fermilab. “This flexibility allows us to quickly reconfigure the storage ring to focus on different high-impact opportunities. That’s exactly what we’ve done with this new cooling technique.”

The new technique is called optical stochastic cooling. It was first proposed in the early 1990s, and although significant theoretical progress has been made, experimental demonstration of the technique has remained elusive until now.

This kind of cooling system measures how the particles in the beam deviate from their ideal course and then uses a special configuration of magnets, lenses and other optics to give corrective nudges. It works because of a specific characteristic of charged particles such as electrons and protons: as the particles move along a curved trajectory, they emit energy in the form of light pulses, giving information about the position and velocity of each particle in the group. The beam cooling system can collect this information and use a device called a kicker magnet to feed them back into the line.

Conventional stochastic cooling, which won its inventor Simon van der Meer a share of the 1984 Nobel Prize, works by using light in the microwave range with wavelengths of a few centimeters. In contrast, optical stochastic cooling uses visible and infrared light, which have wavelengths around one millionth of a meter. The shorter wavelength means scientists can sense particle activity more precisely and make more precise adjustments.

To prepare a beam of particles for experiments, accelerator operators send it on several passes through the cooling system. The improved resolution of optical stochastic cooling provides more accurate hits to smaller groups of particles, so fewer trips around the storage ring are required. By cooling the beam faster, researchers can spend more time using these particles to obtain experimental data.

“It’s exciting because this is the first cooling technique demonstrated in the optical mode, and this experiment allows us to study the most fundamental physics of the cooling process.” – Jonathan Jarvis

The cooling also helps preserve the rays by continuously reigning in the particles as they bounce off each other. In principle, optical stochastic cooling can increase state-of-the-art cooling rates by a factor of up to 10,000.

This first demonstration at IOTA uses a medium-energy electron beam and a configuration called “passive cooling” that does not amplify the light pulses from the particles. The team successfully observed the effect and achieved about a tenfold increase in the cooling rate compared to the natural “radiation damping” the beam experiences in IOTA. They were also able to control whether the beam cooled in one, two, or three dimensions. Finally, in addition to cooling beams of millions of particles, scientists are also conducting experiments studying the cooling of a single electron stored in the accelerator. 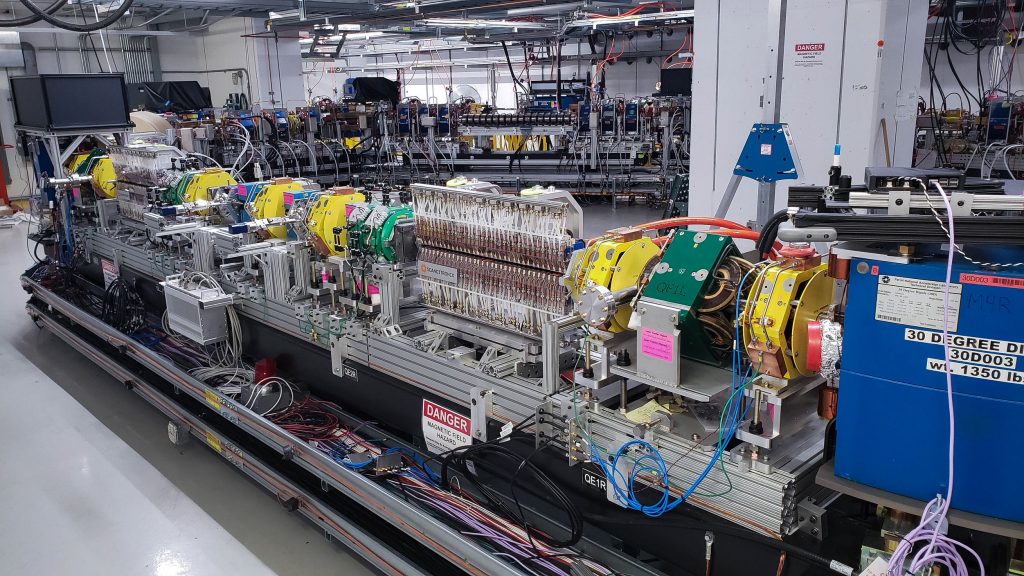 “It’s exciting because this is the first cooling technique demonstrated in the optical regime, and this experiment allows us to study the most fundamental physics of the cooling process,” Jarvis said. “We’ve already learned a lot, and now we can add another layer to the experiment that brings us significantly closer to real-world applications.”

After completing the initial experiment, the team is developing an improved system in IOTA that will be the key to advancing the technology. It will use an optical amplifier to amplify the light from each particle by about 1,000 times and apply machine learning to add flexibility to the system.

“Ultimately, we will explore different ways to apply this new technique in particle accelerators and beyond,” Jarvis said. “We think it’s pretty cool.”

For more information on IOTA and optical stochastic cooling, read this article.

Research at IOTA is supported by the DOE Office of Science.

Fermi National Laboratory is supported by the US Department of Energy’s Office of Science. The Office of Science is the largest supporter of basic research in the physical sciences in the United States and works to address some of the most pressing challenges of our time. For more information, please visit science.energy.gov.