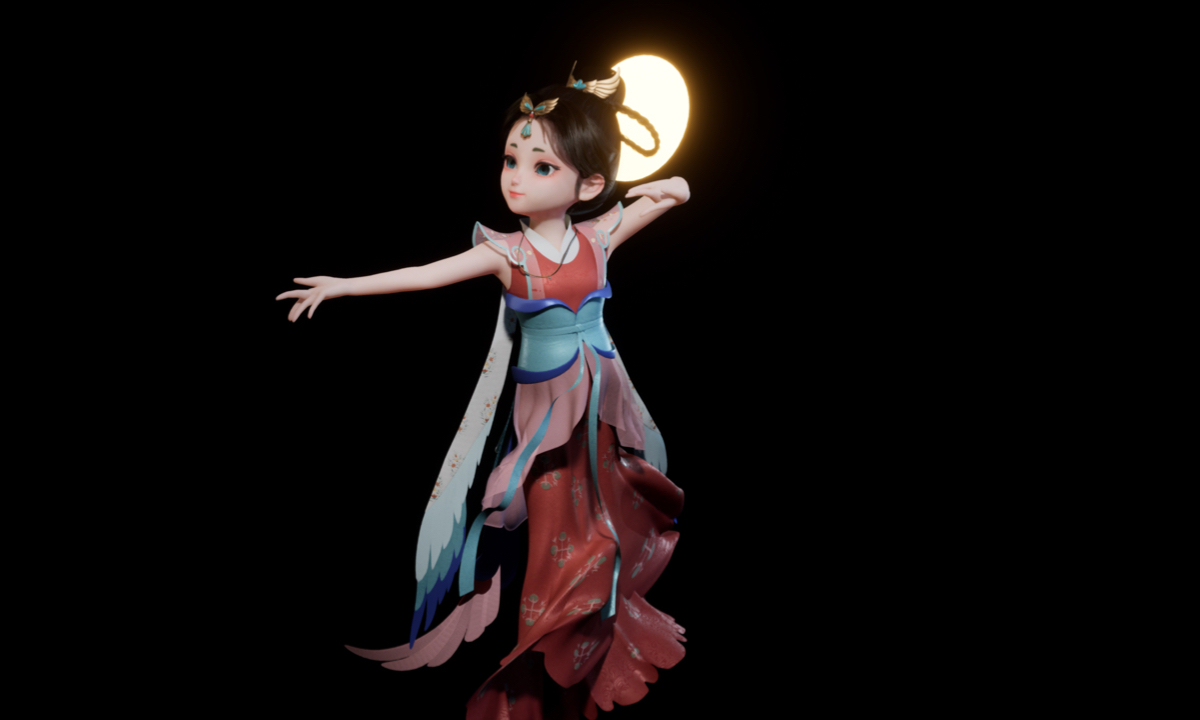 The CGI figure of a dancer wearing traditional Chinese hair and clothing accessories helps promote Buddhist art by inheriting dance movements that originated thousands of years ago. The small figure is inspired by the flying apsaras (female water spirits in Buddhist culture) depicted in murals in the Mogao Caves in Dunhuang, a great treasure trove of art and culture located along the ancient Silk Road.

The virtual figure, named Jia Yao, is the official virtual ambassador of the Dunhuang Mogao Caves in Gansu Province in northwestern China. The grottoes are home to 735 caves containing some of the best examples of Buddhist art.

Jia Yao is part of the Dunhuang Academy’s efforts to use digital technology to promote and preserve the site’s fine cultural relics. In addition to Jia Yao, other applications of the technology include the digitalization of Buddhist murals, statues and texts found at the site, the academy said.

Moving to southwestern China, another important cultural site, the ruins of Sanxingdui, has just announced that efforts are being made to digitize the latest archaeological discoveries made at the site.

A digital archive of archaeological data collected in the ruins of Sanxingdui is being created to promote the digital interpretation and transformation of archaeological research at the site. “This could meet the public demand to test archeology on their own,” Ding Daoshi, a veteran independent analyst in the Internet sector, told the Global Times.

In May, the Central Committee of the Communist Party of China and the State Council published guidelines for developing a national strategy for digitizing the country’s culture. The guidelines note that by 2035, a national cultural big data system will be established to fully represent Chinese culture and allow all people in the country to have access to the results of digital cultural research.

Among the many caves in the caves, a cave containing an important hiding place with documents was discovered in 1900. This so-called “library cave” is one of the most important parts of the digitalization project carried out by Dunhuang Academy and Chinese internet giant Tencent.

Su Bomin, head of the Dunhuang Academy, said more than 50,000 cultural relics had been found in the cave’s library and their influence had spread abroad. The digitalization project aims to reproduce the real history of the cave through laser scanning and photo reconstruction technology, combined with the generation of procedural content and physical imaging technology.

These technologies can restore the details of ancient cave paintings and other cultural relics to the nearest 1: 1 millimeter.

The first cultural relic that will soon enter the public eye in the virtual world is a national first-class cultural relic: a book of accounts dating back to the Song Dynasty (960-1279). This book gives an idea of ​​the economy, culture, calendar and folk customs of Dunhuang at that time.

The ruins of Sanxingdui have also launched a digital interactive space, including new archeological discoveries such as a bronze altar found in pit №5. Entering the digital space, visitors can immerse themselves in the ancient kingdom of Shu while exploring the digital museum and excavation site.

While the actual cultural relics found in pit № 5 were packed and sent to a cultural protection center, leaving the pit empty. However, in the digital interactive space, people can explore the pit before it is dug. For example, fine pieces of gold can be seen scattered around the pit.

Efforts to digitize China’s heritage have been going on for years.

Yu Tianxiu, director of the Dunhuang Academy’s relic digitization department, noted that the earliest efforts to digitize the caves began in the early 1990s. At the time, the biggest debate was over what technology should be used to archive the site.

The fruits of these digitalization efforts have accumulated over the years and the technology used has improved and is now used in more areas, including publishing and art.

Other digital technologies such as AI and motion capture have revived Jia Yao’s virtual figure. To make the young girl look more real, the developers even gave her 3D model a skeleton and facial muscles.

Of course, the challenges remain. Ding pointed out that the huge number of cultural relics is a problem and that a uniform standard for their digitalization has yet to be set. Ding added that digital technologies need to continue to improve, as current technologies can easily recreate the appearance of an object, but it is difficult to record the detailed internal structure of objects.