Jerusalem’s art scene is active, dynamic and contemporary, a message made loud and clear ahead of the upcoming Manofim Festival, the city’s largest annual art event, which takes place from September 13 to 17, on rooftops and in studios, galleries and gardens throughout the whole city.

Founded by Lee Hee Shulov and Rinat Edelstein 14 years ago, the citywide arts event engages local and visiting artists, some of whom are in residence at the city’s Talpiot Artist Cube Artists’ Studios, and features music events, children’s activities and a 10th anniversary celebration of HaRama art magazine.

Tickets can be purchased for Manofim tours, which last around 2.5 hours and will take visitors to several Manofim sites in different parts of the city. One tour starts at the HaMiffal art space behind the Waldorf Astoria Hotel and ends at Hadassah Academic College, while another starts at Leper’s House in Hansen and ends at the Artists House downtown.

One of the veteran places to see works by local and visiting artists is at the Talpiot Art Cube Artists’ Studios, located above the auto garages and mechanics on Hauman Street and where Shulov and Edelstein first created Manofim.

An exhibition by Ofri Knaani titled “Testimonies of Things” will open on September 13 at the Art Cube Artist’s Studios, featuring Knaani, an Israeli who has lived abroad for most of the past 20 years, telling the story of a fire in 2018 at the National Museum in Brazil, through photographs and texts about the geological and digital remains left by the fire.

About 20 million items went up in the flames, curator Dweer Shaked said, turning it into a museum of things that no longer exist.

Artist Netta Moses demonstrates her exhibition ‘Deep Fake’ about her grandmother and aging images in the app ahead of the Manofim contemporary art festival in Jerusalem, September 13-17, 2022. (Jessica Steinberg/Times of Israel)

The Artists’ Studio is also one of the places where Manofim participants can meet local artists for First Reveal, the festival’s ongoing meetings with new and emerging artists in studios around the city.

Attendees can book a visit with Netta Moses on September 13 at her Art Cube Artists’ studio, where the Bezalel graduate is working on Deep Fake, a video work about her beloved grandmother, digging into Moses’ own photographic archives and finding alternative ways of seeing and maneuvering the two women’s very similar faces using aging apps.

“We had an agreement that I wouldn’t use her pictures,” said Moses, whose grandmother died at age 92 and was never attached to screens, not even a television screen. “Savta had an old-school approach, but he was also worried about trusting what we were seeing, because screens make it so easy to fake anything.” 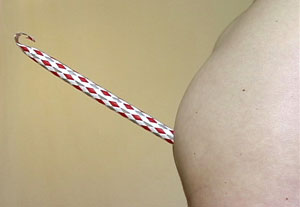 Video artist Sharon Balaban’s work from a previous exhibition, part of her ongoing exploration of the female body and existence, and part of her upcoming exhibition at the Manofim Festival in Mammoth, September 13-17, 2022 (courtesy of the Herzliya Museum of Art)

The solo exhibition, curated by Sala-Manka, is a multi-screen installation in which Balaban deconstructs and re-examines the female body and its relationship to the environment in which it exists.

She sees the female body as a place of fertility and production that “creates and produces,” Balaban said, “but not as something magical, but something more animalistic.”

Balaban will demonstrate his vision in more than a dozen video installations at Mammoth, using his own obsession with banal, simple household objects to unravel the sexual, sensual and absurdly repressed female domestic existence.

Hansen House will also be the site of a day party on Friday, September 16 with singer Rif Cohen and El Kat, as well as the Manofim conference, which will take place on Thursday and Friday, discussing art in the age of politics, climate change and technology.

A family activity at a previous Manofim festival, this year will be held on September 13-17, 2022 (courtesy of Itamar Grinzburg)

(While at the Hansen House, be sure to visit the newly constructed Tea House Sound Theater, an outdoor sound space relocated from the nearby Jerusalem Theater, where several speakers play a 30-minute loop of meditative music by the Medusa Band.)

For more information on events, activities and tickets (including the Manofim Day Ticket, which includes entry to all of the day’s events), go to the Manofim website.

You are a devoted reader

We’re really glad you read x Times of Israel articles in the past month.

That’s why we launched the Times of Israel ten years ago – to provide discerning readers like you with must-see reporting on Israel and the Jewish world.

So now we have a request. Unlike other news outlets, we have not installed a paywall. But because the journalism we do is expensive, we invite readers for whom The Times of Israel has become important to help support our work by joining Times of Israel Community.

Thank you,
David Horowitz, founding editor of The Times of Israel