By David Churchill for the Daily Mail

A shocking internal report found that Stalled Vehicle Detection (SVD) technology flagged only 62 percent of those stuck in real traffic within 20 seconds.

That’s the time frame deemed acceptable by the National Highways agency, according to an unpublished 2019 report obtained by the Daily Mail under the Freedom of Information Act.

Motoring groups said it showed the radar-based SVD system was “woefully inadequate” and meant drivers were often “sitting ducks” when they broke down on All Lane Intelligent Motorways (ALR).

They have the hard shoulder removed and drivers can stay in traffic at the risk of being hit by other vehicles.

The study found that a fifth of SVD alerts were wrong, when no more than 15 percent should be wrong

About a fifth of SVD signals are also wrong, the study found, including flagging oncoming lane crashes where they actually happen. National Highways says no more than 15 percent should be wrong.

The revelation raises fresh questions about why ministers and National Highways have pushed ahead with the roads despite such failings in a key safety feature. 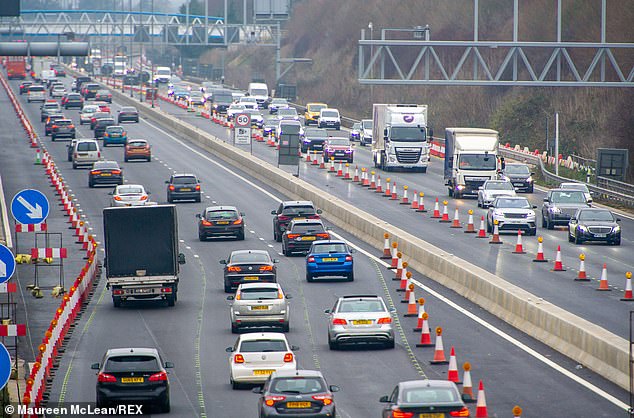 An undercover reporter at a National Highways Control Center witnessed the system fail to activate when a car was stuck on a smart section of the M25 for 30 minutes.

The February 2019 report, compiled by external consultants, has been kept secret by National Highways, although safety campaigners have called for it to be published.

Another deadly stretch of smart highway opened this week to create the largest road of its kind in the country.

The 15-mile stretch from Hayes, west London, to Maidenhead adds to a neighboring 17-mile stretch opened earlier this year.

It means the hard shoulder has been removed and turned into an extra busy lane on 32 miles of the M4 between junctions 3 and 12, running from west London to Berkshire.

It’s a 64-mile road when both sides of the lane are included. Most smart highways are ten or more miles, or 20 including both sides.

While 100 miles of such projects have been stopped, another 100 miles are to come, including the M4 section.

It tested the SVD over four days on a section of the ALR motorway on the M25 between junctions 23 and 27, with 563 signals raised. Only 62 percent were detected within 20 seconds and 86 percent within a minute, with 14 percent missed.

The report said: “It is clear that rapid response is vital to the effective use of the SVD system, as earlier operator intervention will mitigate the risk posed by a stalled vehicle in a busy lane.”

SVD is critical to safety because lanes blocked by crashes cannot be closed to traffic until the system alerts control room officials.

The AA’s Jack Couzens said: “So-called ‘smart’ highways have been sold to the public by National Highways on the basis that ‘if the worst happens, we’ll find you and keep you safe.’

“Shockingly, drivers are sitting longer than they should. These figures show that the system is grossly inadequate.

Claire Mercer, whose husband Jason was killed on a non-gradient section of the M1 in 2019, said: “The technology isn’t working and it’s killing people.”

The Department for Transport said it had commissioned an assessment of SVD and had “paused new smart highway schemes until we gather more data”.