Walk into the homes of many middle-class and middle-aged Americans and you’ll find decorative wooden signs and vinyl decals on the walls that declare things like:

“Live, Laugh, Love”
“bless this mess”
“The family is everything”
“It’s Wine Time”

These are the things you see at Hobby Lobby or on the Instagram feeds of moms pumping out relatable content for moms.

It’s the kind of stuff the Zoomer generation thinks is silly and calls it “cheugy.”

It’s pretty dumb. At least when it comes to the tired, clichéd phrases that people prefer to decorate their homes with.

But the basic impulse to surround yourself with inspirational quotes isn’t unique to our time, and it’s actually a pretty good idea.

Philosopher and essayist Michel de Montaigne was an admirer of the practice as early as the 16th century. He wrote inspirational words on the ceiling of his office that were decidedly more intoxicating and less eye-rolling than “Live, Laugh, Love.”

But before we get to these inscriptions, we must talk about Montaigne’s study, certainly one of the most interesting of the various libraries and studies in history. 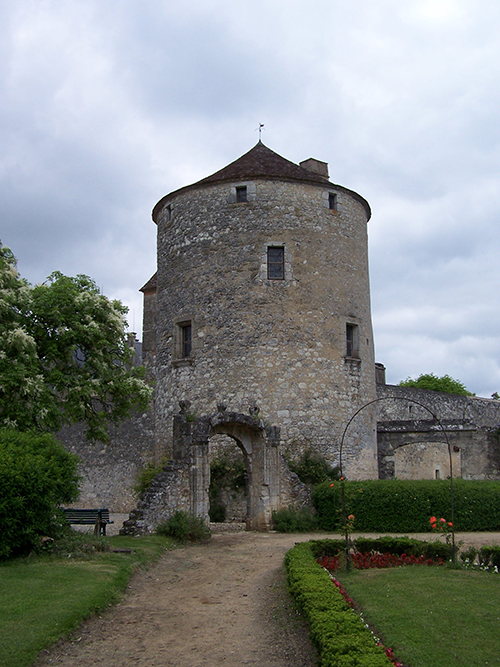 The tower of Montaigne’s castle.

Montaigne lived in a castle, and when he retired from public service in his late thirties, he had one of its towers renovated to his specifications. The first floor of the tower had a chapel for private worship, the second floor served as a bedroom, and the top floor contained his study and his vast library of over a thousand books. 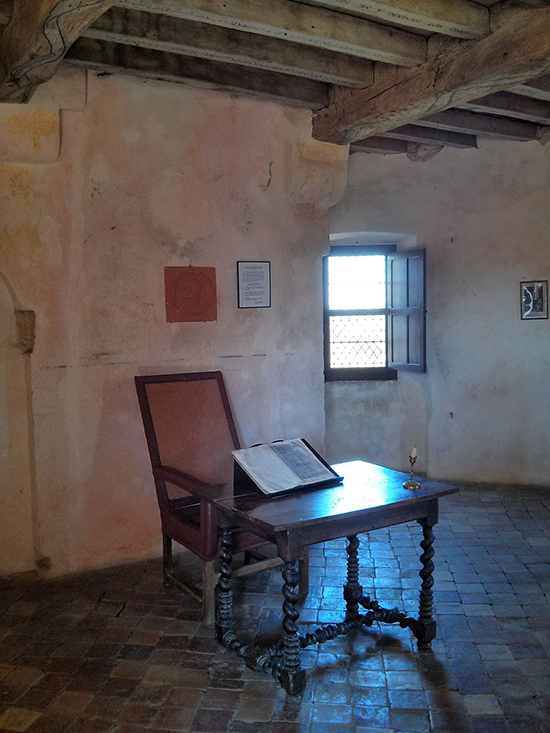 Montaigne’s desk where he wrote his famous Essays. 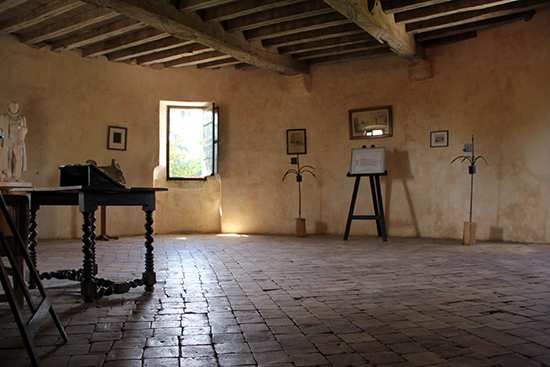 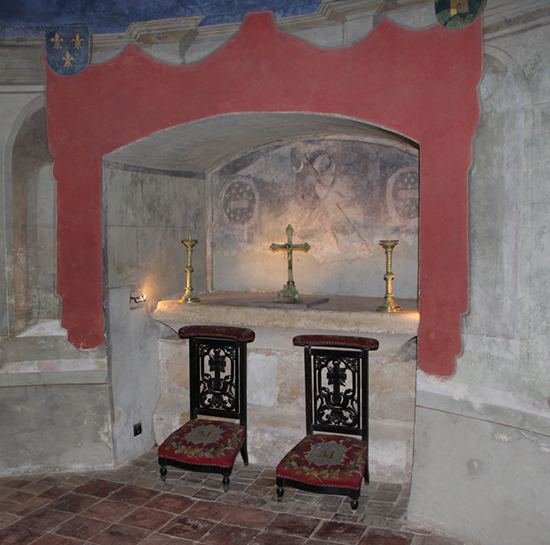 Although occasionally interrupted by domestic duties and political responsibilities, Montaigne spent much of the next twenty years within the walls of this three-story sanctuary, studying and writing his famous essays. The tower was a physical manifestation of his metaphorical idea of ​​having a “backshop” of the mind – a place where one could be alone with one’s thoughts and privately tinker with ideas without worrying about the mundanity of everyday life and the opinions of others. 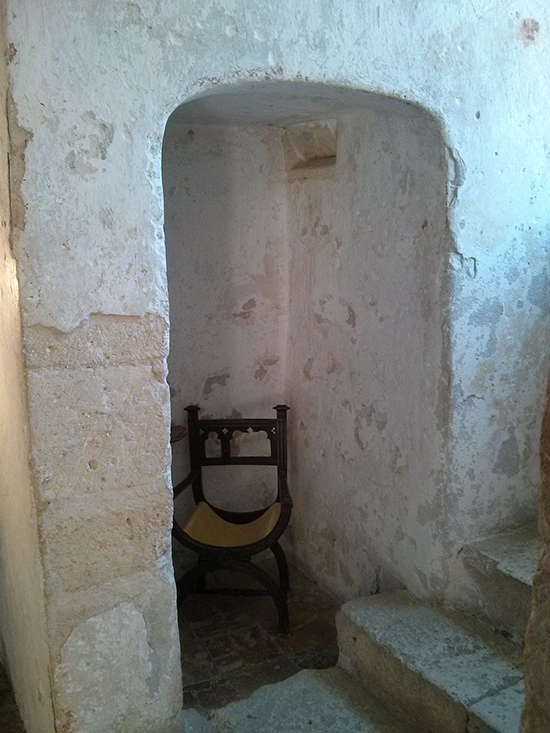 According to the French Wikipedia, it is “the hiding place that Montaigne used to hide from unwanted visitors.” Brilliant!

I would like to have a tower like Montaigne’s. A sanctuary where you can worship, sleep and study all in one place. Heavenly!

But back to those inspirational ceiling inscriptions. 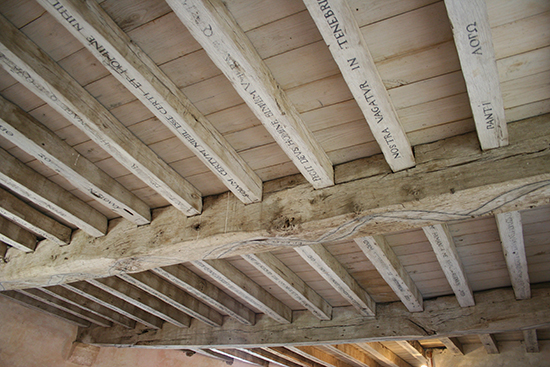 To stimulate philosophical research while writing his essays, Montaigne had fifty-four Greek and Latin maxims painted on the ceiling beams of his library/study. Quotations come from the Bible (the book of Ecclesiastes, often paraphrased in Montaigne’s own words, is a favorite) and classical authors such as Lucretius, Horace, and the Greek skeptic Sextus Empiricus.

Montaigne sometimes sprinkles the Attic maxims verbatim in his writings, as they relate to the common, recurring themes of his work: the vicissitudes of fate and the limits of human reason and knowledge. Basically, “Life is hard, man!”

I can imagine the philosopher staring at the ceiling with his hands behind his head, reading a quote and being inspired to write some sentence of his own about the finitude of life. 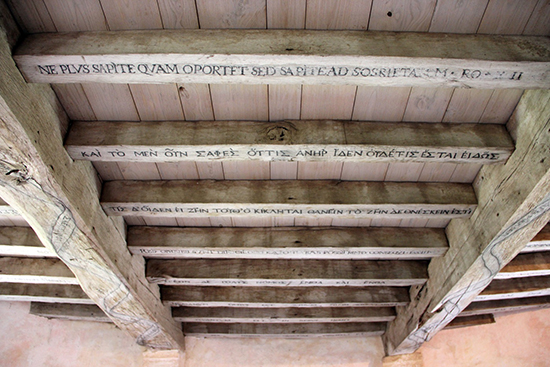 Below you will find some of the quotes that Montaigne inscribed on the rafters of his ceiling. (For a full list and more about their sources, you’ll find a meticulously documented and analyzed collection here.) Perhaps you’ll get some philosophical inspiration from them.

While anyone’s ego could use an amazing, humility-generating kick every now and then, most people are unlikely to find Montaigne’s skeptical, sobering kind of motivation their cup of tea. But use the overarching idea of ​​his practice as inspiration to create your own: consider making some signs or vinyl decals of quotes that mean a lot to you personally and stick them on the walls, mirror or ceiling in your bedroom, bathroom or an office. Such “moral reminders” can help you keep your principles at the forefront of your mind and improve your character—at least when they go beyond simply living, laughing, and loving.

“I don’t understand – I stop – I explore – I take for a guide the ways of the world and the experiences of the senses.”

“Autonomy is the only just pleasure.”

“God gave man the desire for knowledge to torment him.”

“Happy is he who has wealth and understanding.”

“As the wind blows away the empty bellows, so the pride of opinion, fools.”

“Everything under the sun follows the same law and the same fate.”

“It is hard!; but what we are not allowed to correct is relieved by patience.”

‘Cause I see we’re just ghosts
all we that live, or fleeting shadows.

“Oh, wretched human minds! Oh, blind hearts! in what darkness of life and in what great dangers this period of life passes, whatever its duration.

“Not to think at all is the softest life,
Because not thinking is the most painless evil.”

“Which man shall be considered great,
Whom does chance utterly destroy?

“All things, together with heaven, earth, and sea, are nothing in comparison with the sum of the universal sum.”

“A fool has more hope of wisdom than the man who calls himself wise.”

“No new delight can be forged by continuing life.”

“It is possible and it is not possible.”

“Be not wise in your own imaginations.”

“Neither fear nor desire your last day.”

“God suffereth no man but himself to magnify himself.”

“I shelter where the storm pushes me.”

“I am a man and nothing human is foreign to me.”

“Be not too wise lest you become senseless.”

“If a man thinks he knows something, he knows nothing.”

“If a man thinks himself something when he is nothing, he deceives himself.”

“Be not wiser than necessary, but be wise in measure.”

“No one has ever known the truth and no one will ever know it.”

“Who knows if what we call dying is life,
and live die?”

“There is nothing more beautiful than being fair, but nothing is more pleasant than being healthy.”

“All things are too difficult for man to understand.”

“The whole human race has too greedy ears.”

“To observe due measure and hold fast the end and follow nature.”

“Woe to those who are wise in their own eyes.”

“Enjoy pleasantly the present things, others are beyond you.”

“Every opinion is opposed by an opinion of equal weight.”

“Our mind wanders in darkness and, blind, cannot discern the truth.”

Michael from the hospital

“What you are so proud of will be your downfall, you who think you are somebody.”

“What worries men is not things
but what they think of them.

“It befits a mortal to have thoughts fit for men.”

“Why, with projects for the distant future, tire a mind unequal to them?”

“I don’t define anything.”