Years before he first stepped foot on campus this summer, Jesse Mendez was quite familiar with the acronym “ASU.”

Not the ASU the Sun Devils know. One he created.

Mandela Washington Scholars cheer at a ceremony at the end of their six-week session at ASU in the summer of 2022. ASU photo by Mark J. Scarp
Download full image

Mendes, 26, has not founded his own university. He founded the Angolan Skateboard Union, known in his country as ASU. Mendez and the syndicate built the country’s first skateboard park to inspire and empower hundreds of Angolan youth.

Another young African leader, Mariama Kone, was also at Arizona State University this summer for the fellowship. She is a passionate human rights advocate in The Gambia helping women victims of crime, children at risk and other marginalized groups find empowerment and justice.

Mendez, Konech and the other Washington Mandela Scholars came to Phoenix with talent, a history of achievement and a sincere desire to better serve their communities, said Hector Zelaya, director of executive education in the College of Public Service and Community Solutions at ASU to Watts.

During the six weeks in Phoenix, the fellows learned about American public administration and how government and nonprofit organizations serve constituents. After returning to their home countries, they can apply what they have learned in a variety of leadership roles.

From 2014Note: The program was not held in 2020., the Watts College-based fellowship annually hosts accomplished young professionals to study public administration. The program is designed for Sub-Saharan African leaders aged 25–34 years who serve the public through governmental and non-governmental organizations, community-based non-profit organizations or volunteering.

The Mandela Washington Fellowship is the flagship of the Young African Leaders Initiative, a program of the US Department of State’s Bureau of Educational and Cultural Affairs and its implementing partner IREX that empowers young people through academic work, leadership training and networking.

Zelaya said the fellows learn about “the current American experience, strengths and weaknesses.” He said what makes the fellows’ time in the Valley so rich in information and ideas is the contribution of more than 75 ASU and community members who volunteered their time and knowledge.

Satisfying a need through skateboarding

Mendes was born Angolan and grew up for many years in South Africa, where he said he met Nelson Mandela as a 7-year-old boy while visiting a hospital where the South African leader was receiving medical treatment.

Mendes returned to his home country with his family, where opportunities for young people were much less than in South Africa. Infused with a strong motivation to help youth feel empowered to improve themselves and their surroundings, he relies on his love of skateboarding to show them that they can excel at whatever they set their minds to achieve. “Angola has very limited resources in sports,” Mendes said. “There is nothing for local children, youth. Just seeing everyone I grew up with skateboarding helped me stay connected. Growing up, people always looked after me when we were skateboarding.”

And so years later, back in Angola, Mendez had the idea to do something with skateboarding to help young people build confidence and get direction in their lives.

Skateboarding is popular in Angola, but there were no places to safely enjoy the sport. The youths will be skateboarding in the streets until local authorities offer help, Mendez said.

The skateboard union united enthusiasts under one umbrella.

“There were no facilities. There was no voice. Skateboarders were discriminated against,” he said. “I took all those odds and found solutions to fight those odds to create a skateboard alliance. Through it, more young people can learn that there is a way to be included in society and make something of themselves.”

It was hard work that involved fundraising from donors, which required Mendez to write a 62-page proposal. Relying in part on social media, Mendes reached beyond his nation’s borders to other countries, including Europe and North America, soliciting and receiving donations.

The skate park was built in 28 days. Through the union, skateboarding competitions continue to grow in Angola.

Once in Arizona, Mendez didn’t let up. He took the time to travel to Scottsdale to meet skateboarders there, swap stories and get information.

“You got a skateboard, you’re a friend,” he said.

Also, as luck would have it, while Mendez was eating at a restaurant in Phoenix, a producer from a local television station overheard him talking about his work, which led to a news story that aired in July.

Mendes said it was a joy to work with young people in his country.

“The talent they have, the hunger, the interest, the skill level; it shocked me, their commitment to skateboarding. The way they look at me to motivate them makes me feel good,” Mendes said. “I work with children in foster homes, children without fathers, mothers left on the street. (Skateboarding) gets them off the streets.”

Armed with many lessons and examples learned from the six weeks he spent in Arizona, Mendez says he plans to expand the skateboard union throughout Angola by recruiting more young people as board members, teachers and coaches. He hopes to build four more skate parks in Angola and one day create the largest skate park in Africa.

Advocacy for human rights on an “international platform”

Kone, 25, whose bachelor’s degree is in political science, advocates for marginalized groups in her country, The Gambia, including victims of human rights abuses and people with disabilities. She has spent more than two years as a human rights advocate, currently working as a program associate at the Women’s Association for the Empowerment of Victims.

Through her work with the organization, Kone engages with international and local civil society organizations to advocate for victims and ensure that perpetrators are brought to justice. 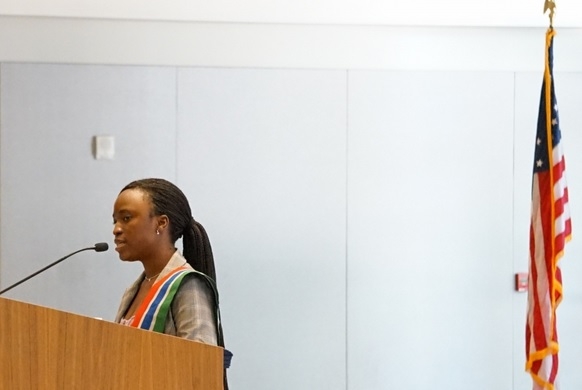 Mariama Kone, a 2022 Washington Mandela Scholar, addresses her cohort at a closing ceremony at ASU this summer. ASU photo by Mark J. Scarp

She said the fellowship appeals to her because she and other fellows can discuss ideas on an international platform.

“They are agents of change in their local communities. As a young woman, it is difficult to have sponsors for various projects. I was at entry level; I had just finished my bachelor’s degree,” she said.

The scholarship helped better prepare her for what she wants to do in public administration and civic engagement, she said, “somewhere I could improve my skills and become someone good at public speaking and connect with other young people from other African countries.’

Coneh said that during her time in Phoenix, she was mentored in human rights work and had the chance to visit organizations in Arizona that perform similar functions to those she works with back home.

“That alone is very important. I can prepare better and understand that I am a person who can create an organization but make an impact. You want to make a difference in the lives of the people you deal with,” she said.

Coneh said he also appreciates scholarship opportunities to attend public institutions at many levels, from local to national.

Coneh said she plans to apply what she learned to her advocacy work and pass on her new skills to young people in her community.

She said one of her mentors told her to see a fire in her eyes for her work and to never let that fire go out. It’s something she said she’ll never forget. The more she focuses on making an impact, she said, the more her Arizona experience will help her become the leader she wants to be.

“One thing I will keep and tell my children: Don’t let the fire in your eyes go out,” she said.

The other fellows were “amazing young people,” she said, who inspired her to want to learn and do more and broaden her horizons.

“Whenever we had events or discussions about things, everyone had a different perspective. I learned so much from them. I was able to learn about things in policy analysis that have already changed my perspective on how I want to approach what I do. I am not the same person I came here with.”

On the last day of the session, Coneh was one of the few colleagues invited to give a short presentation to the whole group. Speaking on the topic of ‘Leave No Child Behind’, she described many problems facing African society and what is preventing more solutions.

“In Africa,” she said, “it’s not a lack of potential, it’s a lack of opportunity.”