Continuing a four-year effort to screen patients and treat medical problems in Guatemala’s underserved communities, a team of two Liberty University professors and four students from the Department of Community and Public Health spent June 11-22 in the Santa Rosa area evaluating 400 residents.

The current project is in partnership with the Lynchburg, Virginia, Iglesia de Las Americas church and was made possible by a grant from the Liberty Center for Research and Scholarship. This year’s ride also partners with local nonprofit Manos Unidas and six churches in the Santa Rosa area.

The team was led by the head of the department, Dr. Oswald Attin, and the teaching assistant and mentor, Dr. Gineska Castillo. Students used the trip as practice to gain skills and experience that will benefit their future careers.

“I was a student of (and worked for) Dr. Attin during both years of my master’s degree, and he is a great public health professional with incredible knowledge and experience in the field, so I knew I would be able to learn many valuable skills that they would prepare me for a job like this in the future,” she said.

In preparation for their work in Guatemala, the students conducted research on the cultural significance, social norms, and environmental aspects that may affect patients’ health and access to health care.

“While we were in Guatemala, the four of us ran six health clinics in five rural locations in Santa Rosa, where we had stations that checked blood sugar, anemia, blood pressure, weight and height,” explained Doherty. “They then went to see a doctor who would review their forms and be able to help with any issues, and then patients would head to the pharmacy where they would pick up vitamin packs, medication and face masks.”

Patients filled out intake forms, which the students will use to analyze data on the region’s nutritional status, water, sanitation and hygiene practices, and family planning.

Atin and Castillo conducted a summer trip to a different region of Guatemala last year, where they screened for the same medical problems, trained local health workers and served communities affected by recent hurricanes. One month prior, the department also held a local Spanish-language health fair at the Iglesia de Las Americas. 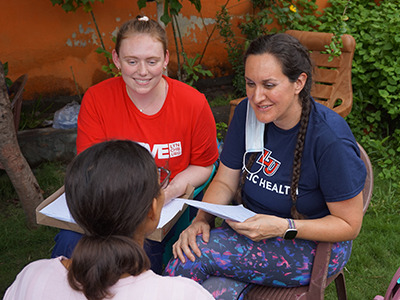 Compared to patients from regions surveyed in previous cases, Atin said the Santa Rosa population has more stomach-related problems, including bacterial and stomach infections due to poor water sanitation and food-borne illnesses such as parasitic diseases. There were also numerous cases of anemia and uncontrolled blood pressure.

Dougherty said the patients left an impact on her as she remembers hearing their complicated stories and seeing their positive outlook on life.

“Their joy and perspective was such a wonderful reminder of God’s goodness in every season,” she said. “People all over the world are wonderfully created, each with their own story to tell. I am grateful that God gave me the opportunity to see more of His creation and to be involved in a new culture.”

Among their patients was a young man who worked at the team’s hotel. Examination revealed that he was severely anemic, so much so that he was taken to a local clinic for further tests. The man tested positive for an intestinal infection with the bacteria H. pylori, a problem that had gone untreated for a considerable time and had affected his health. Atin said the man was greatly affected by the care and support he received from the Liberty team.

“He was so grateful and amazed by the love and care he received that he decided to accept Jesus Christ as his Lord and Savior,” Atin said. “Our department’s mission verse is Proverbs 13:17, ‘A faithful messenger brings healing,’ and we’ve witnessed that first hand.”

Liberty’s Public and Community Health Department will continue its work in Guatemala next summer in the Puerto Barrios area.