Skip to content
Written by Gabriela Enamorado on July 5, 2022 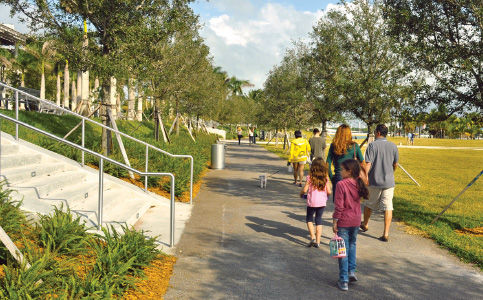 The animals – the painted metal types – are on their way to the center. A pet sculpture garden is expected to be ready in Maurice Ferré Park by December. A soccer field, playground and other art displays are among the next projects headed for the park.

Miami City Commissioner Joe Carollo, the man behind the idea, told Miami Today that the new pet sculpture garden will be ready before Art Basel’s art-minded visitors arrive in December, a convenient time for the garden with dog and cat sculptures between Biscayne Boulevard and Biscayne Bay to boast Miami artists.

Certain artists to be featured were to be chosen on July 1 at the Bayfront Park Management Trust meeting.

The 21-acre Maurice Ferré Park opened in 1976 as Bicentennial Park and was later named for Miami’s first Hispanic and first Puerto Rican-born mayor, who served from 1973 to 1985 and led the campaign to purchase the land . In the early years, the park became a refuge for the homeless. In 2014 the park was renamed Museum Park and in 2019 it was renamed again in Mr. Ferre’s final months.

This pet sculpture garden aims to transform the park and attract people from all over the world to Miami, both art lovers and pet lovers. The idea was formed when Mr. Carollo’s wife told him about a similar park in Cali, Colombia, called Parque El Gato De Tejada. This cat theme park has one large cat statue among 15 smaller statues. The park was a huge tourist hit in Colombia, and Mr. Carollo was inspired to bring something similar to Miami.

After he presented this proposal to the Bayfront Park Management Trust, which he chairs, it was approved. The garden will go into an unused sculpture garden built in the old museum park. Its name will be El Paseo de los Gatos y Perros – the path of cats and dogs. The only stipulation was that Miami-Dade artists participate.

“All the artists you’re going to see are local artists,” Mr. Carollo said. “I will tell you, you will be amazed at how beautiful some of the artwork we have is.

“You’re going to give a lot of great opportunities for Miami artists to be exposed, to see their work where people will come from all over the world to see it,” he said. “We have a lot of great local artists who don’t get the opportunity to have that kind of exposure. We will give it to them.”

To further attract art lovers, a sculpture exhibit will highlight works by Costa Rican Jorge Jimenez Deredia. “From October 15, we will have one of the most famous artists of Latin America and Europe, whose sculptures will be placed in the park, at his expense,” said Mr. Carollo, “12 beautiful, huge sculptures that he will place, for for people to see and enjoy.

Art isn’t the only thing coming to the park. Outdoor facilities come for those who live actively. A soccer field, playground and outdoor exercise equipment area are under development, with no estimated time when they will be ready.

The soccer field is planned to be about 102 by 52 feet, with plenty of green space. Exercise equipment is expected to arrive sooner, although it is still in development.

“Probably the next space we’ll have sooner rather than later will be the outdoor exercise equipment area,” Mr. Carollo said. “We are currently looking into that. What we end up putting in there is 20 new exercise machines. We then look at multiple types of playgrounds for toddlers to older children.’

All of these projects are to be funded with $2 million that the Bayfront Trust Management Trust is receiving from the Omni Community Redevelopment Agency.

This money can only be used at Maurice A. Ferré Park for new projects.

“We can’t use it anywhere else,” Mr. Carollo said. “We can’t even use it to maintain the park. Can only be used for new projects. I think we used some of that money to build the largest dog park in Florida.

“Well, look, first of all, only a handful of people think that way,” Mr. Carollo said. “It was against me personally. So any good I would do, they would attack me. Second, we spend the money on what we were supposed to spend on projects at Maurice Ferre Park, and that’s exactly what we’re doing. But once it’s done and put up, I think you’ll find that the vast majority of people who come and see it, who are here, will be very proud of it.

He said the Alley of Cats and Dogs is expected to become a landmark destination, making way for Miami to be known for its diverse group of artists. The full list of artists who will perform is not yet ready.