On the surface of the moon are two large geological domes with a unique composition – each similar in size to Mount St. Helens – but how they formed on the lunar terrain remains a mystery.

On Earth, such characteristics are usually formed by highly viscous magmas, usually composed of much more quartz and much less iron than is typical of rocks found on the moon.

Dome-like volcanic formations such as these require a significant amount of repeated processing and processing of rocks and minerals to form. On Earth, this can be helped by our oceans of water and plate tectonics, but without these key components of the moon, planetary scientists have been left wondering how these domes formed and evolved over time.

A new NASA space mission, including Arizona State University and led by Kerry Donaldson Hannah of the University of Central Florida, aims to answer key questions for the first time about how these formations originated.

“This will be the first time we have studied this type of feature closely on the surface of another planetary body,” said Craig Hardgrove, co-researcher on the Lunar Vulkan Imaging and Spectroscopy Explorer (Lunar-VISE) mission. Hardgrove, an assistant at the School of Earth and Space Research and project director for ASU’s NewSpace initiative, will develop a tool that will be part of Lunar-VISE.

“We are excited that our free set of tools from ASU and Ball Aerospace has been selected to tour and study the Gruithuisen domes to better understand how they formed,” added Donaldson Hannah, principal investigator at Lunar-VISE.

ASU News spoke with Hardgrove to discuss exciting lunar research, the key role of ASU and what the findings on the future of the moon could mean.

Question: Can you tell us about the Gruithuisen domes on the moon? And what are the goals of this space mission?

Answer: Gruithuisen domes are thought to be rhyolite domes formed by sticky magma, rich in silica, similar in composition to granite, but it’s a bit of a mystery how we get these more advanced compositions of planetary bodies like the moon that don’t. have large bodies of water or plate tectonics.

If we can measure the composition of the rock around the domes, as well as part of the dome material itself, this will help us understand which process worked.

Question: How is ASU involved?

A: I am a co-researcher and instrument scientist on the mission, and our team at ASU will provide NASA with a neutron and gamma spectrometer that will be mounted on the rover and land on the surface of one of the Gruithuisen domes. The neutron and gamma spectrometer is an instrument that measures the elemental composition and hydration of the surface around the domes to about a meter (3 feet) in the ground.

With it we will get information about all the elements in the rocks in the ground around the rover – how much thorium, how much iron, how much silicon, and how much hydrogen, which tells us about the telltale presence of water in the area.

Question: Will the neutron and gamma spectrometer be designed and built at ASU?

A: Yes, ASU is leading the development and delivery of this instrument on the Lunar-VISE spacecraft. The tool will be designed and built here at ASU in one of our clean rooms at ISTB4. This is made possible in part by the academic and commercial collaboration we have with ASU NewSpace, and the instrument will be based on our previous instrument, the Miniature Neutron Spectrometer (Mini-NS), which was developed for the LunaH-Map mission.

Here we will qualify the instrument, perform thermal vacuum tests and make sure that it is ready for operations on the moon’s surface and that it can withstand all the launching loads it will experience during its journey to the moon. We will deliver it to Ball Aerospace in Colorado, which does instrumental integration in the rover.

Once on the moon, all the scientific data the neutron and gamma detector collects will come here at ASU, which we will process and analyze to provide measurements of the amounts of thorium, iron and other elements in the rocks, and potentially how much water there is. .

The operation of the rover is planned to last 10 days, and the launch is currently planned for 2026. 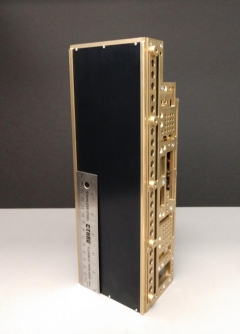 Q: What do you think you will find?

A: Ideally, we would like to confirm or deny some of the excellent theories for the formation of these characteristics, which are made from previous data collected from orbital spacecraft. There were many ideas about how these domes formed, and some say that thorium levels should be high. Some say thorium should be low. We will go to places around the domes and measure it.

If we can measure the content of thorium, as well as the content of iron and other elements in the rocks, this will be part of the puzzle that will help us determine a specific mechanism for the formation of these domes.

Question: Why is it important to know how and why these moon domes formed?

A: This is a scientific mission of research. We do not fully understand how these dome features were formed and so far we have only theories. Proving one or more of our theories right or wrong will help us understand the history and evolution of the Moon, our closest planetary neighbor in space. Proving true or false theories is essential to our work as scientists and researchers and helps us understand the world and our place in it.

On Earth, geologists as early as the early 1900s had a theory that plate tectonics was a dynamic thing happening on this planet. At the time, many people said it was crazy. Then, through careful study, they realized that this was something that had happened and was happening during the evolution of the planet. Now, we take it for granted that the continents of our planet have not always been what they are today; they moved on the surface of the Earth.

Just as scientists tested these early theories on Earth, this mission will allow us to test theories about the formation of these domes on the moon, which will help us understand the lunar surface and the interior of the moon have evolved over time. And let’s hope we can make predictions about how the moon will continue to evolve in the future. This may or may not have consequences for the future of human life here on Earth. It is possible to find useful information about the mineral resources of the moon. We can learn that these domes are enriched with rare earth elements or potentially hydrated minerals; we just don’t know. But first we need to look at the most fundamental issues, so we are most curious what these domes are and what they mean for the history of the moon.

Top image: NASA plans to send a lander and rover to the beautiful Gruitweisen domes seen in this controlled mosaic, and LROC images will help steer the road. The domes are located at 36.3 ° N, 319.8 ° E. (Image is 55 km wide, north is up.) Photo courtesy of NASA / GSFC / Arizona State University