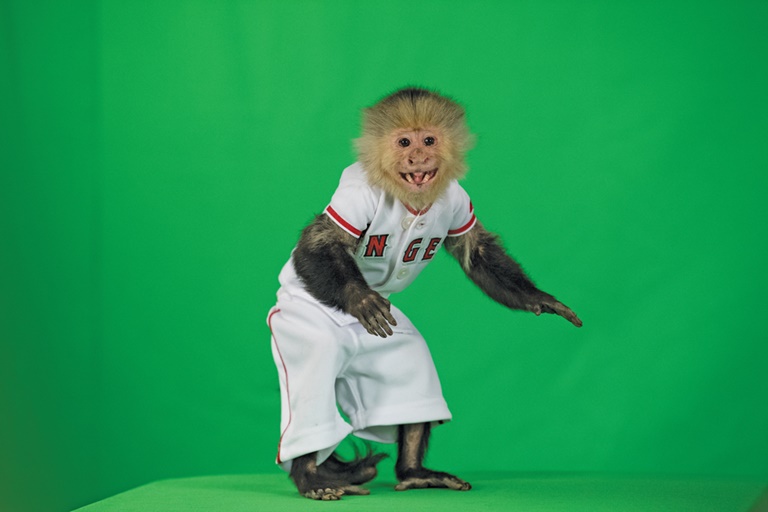 The original Rally Monkey was just a clip from the movie Ace Ventura: Pet Detective, but the team now has their own to use for promotional purposes.Angels baseball

Of all the memorable dates in the 62-season history of the Los Angeles/California/Anaheim/Los Angeles Angels, it’s hard to find two more significant than the back-to-back nights of October 26 and 27, 2002. It was on those enchanted nights that the Angels won games 6 and 7 of the World Series against the San Francisco Giants to secure the first and still only title in the franchise’s existence.

Could it be, though, that it was a lazy night 28 months ago against those same I-5 opponents that actually provided the pixie dust that would later allow a then-Disney-owned franchise to turn their ballpark into their own Magic Kingdom? Because on June 6, 2000, the Angels and the world first witnessed the birth of a power that would prove to be a crucial component in a long-sought championship.

Check out the awesome power of Rally Monkey.

The secret weapon was inadvertently created that night by members of the event team. Like almost every venue then and now, the stadium’s big scoreboard often showed film clips to engage the crowd. As the Angels tried to come back from a 3-0 deficit late in the game, Peter Bull, working as a caller from above the press box, looked down and saw this particular clip showing a monkey jumping up and down from the stage in the ” Ace Ventura: Pet Detective’ was prepared.

Dean Fraulino, serving as the game’s video director that day, knew the team needed a comeback, so he suggested putting the words “Rally Monkey” on the clip the next time it was played. Bull approved, and as soon as the clip aired, the audience immediately reacted. Before long, the team did, too, and before the night was over, the Angels won 6-5 and the franchise had a new good luck charm.

Rally Monkey soon became a fixture on the video board and helped give a unique identity to a franchise that had forever existed in the shadow of its Los Angeles neighbors. Fans started bringing their own stuffed monkeys into the ballpark because the team store didn’t yet realize that a new revenue stream had been unleashed. “People were calling and saying, ‘Do you have these rally monkeys for sale?'” Bull recalled.”The team shop said, ‘We have people calling, can you tell me what this is?’ continued to buy these stuffed monkeys.

Not everyone was thrilled, however. In fact, Fraulino says that the day after Rally Monkey debuted, he was suspended by his then-boss for one game because he didn’t get his prior approval.

Never was the Rally Monkey more necessary or more vital than during Game 6 of the World Series two years later. The Angels entered the bottom of the seventh trailing 5-0, nine outs away. But with 44,506 fans reaching new decibel levels, spurred on by their favorite primate cheerleader, Anaheim came back and won 6-5. The Angels shut out the Giants the next night.

Fraulino missed out on the title as he left before this season, while Bull remained with the team before retiring just a few months ago. Both are proud of their work together, which has become the face of the franchise like current superstars Mike Trout and Shohei Ohtani. Tangible bonuses are lacking, but their place in the annals of the franchise is secure.

Fraulino once recalled with a laugh, “They were giving away Rally Monkey board games to the fans, and I went in and said, ‘Do you mind if I get one of those games?'” and they said, “They’re only for fans.” But I came across my name [in some stories] and I was like, “Okay, that’s great, I’m a small part of history, I can live with that.”