Approximately 60 citizens, city officials and members of the Floretum Garden Club gathered Monday afternoon at the corner of 6th and Bell in downtown Edmonds on Monday to unveil and dedicate the club’s commemorative gift to the city and citizens of Edmonds – a new public art installation , which celebrates gardens and floral beauty.

Entitled “Fleuresscence,” the series of three mosaic sculptures is the latest addition to Edmonds’ growing public art collection and promises to be enjoyed by generations to come.

“Today we are donating this artwork to the city of Edmond to celebrate the long and happy relationship the club has had with the city over the past century,” said Floretum member Kelly McHenry, who chairs the committee responsible for the installation. “This would not have been possible without the generous assistance and cooperation of the city and the (Edmonds) Arts Commission.”

McHenry then introduced Mayor Mike Nelson, who expressed heartfelt thanks on behalf of the city and reiterated that this would not have been possible without the hard work of the city’s parks department and crews.

Nelson was followed by Edmonds Arts and Cultural Services Manager Frances Chapin, who specifically thanked McHenry for her active collaboration in making the project happen. “The Floretum Garden Club did a phenomenal job,” Chapin said.

“The impetus for this work is our club’s strong desire to give something permanent to the town in recognition and remembrance of Floretum’s role in the community over the past century,” noted Floretum President Inae Piercy. “After much discussion, we decided that this should be a piece of public art, and today we see it come to fruition.”

The final work is the result of a collaboration between mosaic artist Jennifer Koons and metal sculptor Abe Singer, who were selected by Floretum from among five applicants. The $20,000 project was funded by Floretum with a grant from the Hazel Miller Foundation, the Edmonds Arts Festival Foundation and the Washington State Federation of Garden Clubs.

“I have extensive gardens myself,” Koons said, “so it’s a natural fit for me. I like making garden themed artwork.

“It was a new experience for me to collaborate with Jennifer on this,” Singer added. “I do mostly large pieces and specialize in floral subjects. Doing work on a smaller scale like this was something new.”

A former plumber, Singer first met Kuhns more than a decade ago when he contracted to plumb her new shower.

“I was actually transitioning from plumbing to art at the time,” he explained, adding that it was a bit of a fluke that they came back together to work on this project.

Each of the pieces consists of three different ‘faces’, all representing variations on the theme of gardens, flowers and the complex interrelationship between plants, people and the rest of the living world.

For the Kuhns, working with Floretum, the City of Edmonds and the Edmonds Arts Commission has been a “great dive” into this community. 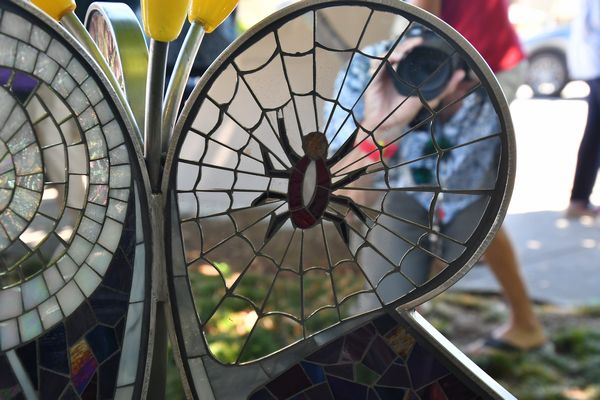 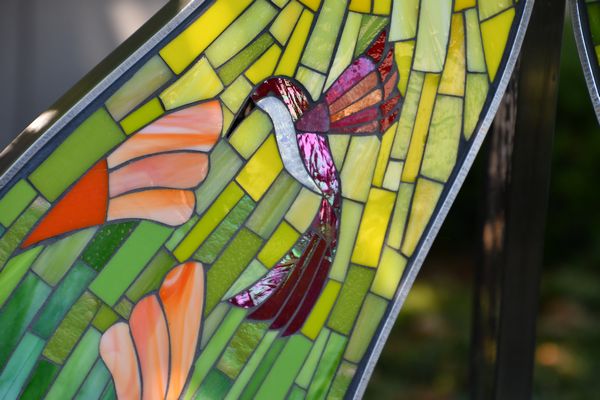 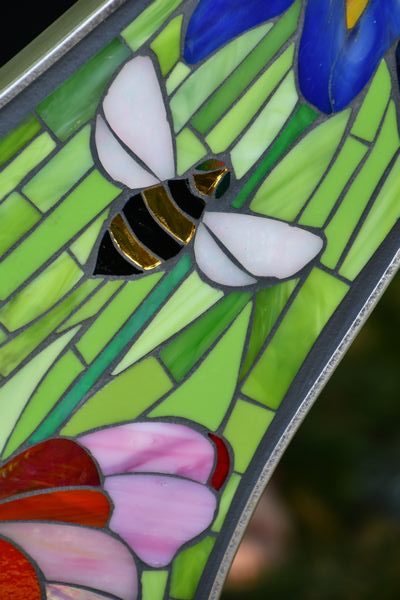 “The best part about public art is that there is something for everyone in every piece,” she noted. “When you see it, it’s a treasure hunt. There’s a lot going on in these three parts. I was particularly focused on the relationship of man with nature and in particular on the reciprocal aspects of this relationship.

For example, in the panels focusing on photosynthesis, Koons depicts images of sunlight falling on plants and turning into foliage, and how it passes between them so that “you can’t tell where one ends and the other begins.” Other panels focus on pollination, water in the garden, gardens at night, and more.

“The location at the corner of 6th and Bell will only add to the year-round audience enjoyment of this work,” noted Edmonds Arts Commission Chair Rhonda J. Soikovsky. “I love the interplay of color and light in this area. In summer it will be shaded by overhanging trees, in autumn the leaves will drop and add visual interest, and in winter the lower light and bare branches will create a whole new effect. Every time someone walks past it, they will rediscover it.”

— Story and photos by Larry Vogel