Curious Kids is a series for children of all ages. If you have a question you’d like an expert to answer, send it to [email protected]

How do you know how long ago the fish were created? Hundreds of millions of years is a long time ago. – Josh, 11, Ephrata, PA

The oldest fossils of fish-like animals date from between 518 million and 530 million years ago. Found in China and called Haikouichthys, these animals were about an inch (2.5 cm) long and had a head with seven to eight slits at its base that looked like gills. They also had a distinct spine surrounded by muscles.

But there are ways Haikouichthys it didn’t look like any modern fish. For example, they had no jaw. Instead, their mouth was a cone-shaped opening similar to those seen in modern fish and lampreys. Also, they don’t seem to have had side fins.

Even though scientists like me haven’t been around to see for ourselves what happened on Earth that long ago, we use geological clues to figure out which animals lived when. This is how we line up very ancient timelines and even put dates on fossils like Haikouichthys.

It is measured in millions

To figure out how long ago fish first appeared on Earth, you need a way to measure really, really long intervals of time. Clocks measure short intervals such as seconds, minutes and hours. Calendars measure longer intervals, such as days, months, and years. What can you use to measure millions of years?

Radiometric dating is the method scientists use to calculate time in millions of years. To determine the age of rocks and fossils, scientists measure the type of atoms they are made of.

You may know that atoms are the building blocks of molecules that make up everything around you – grass, cement, even air. While most atoms are very stable, some, called radioactive atoms, are unstable. Over long periods of time, they spontaneously decay into more stable atoms.

Uranium is one of these radioactive atoms. It breaks down into lead very slowly. Uranium and lead atoms can be found naturally in rocks and minerals in very, very small quantities.

Nuclear physicists have calculated that it would take 700 million years for one pound of uranium to decay into half a pound of lead. This rate of decay occurs at such a predictable rate that scientists can use it to calculate fairly accurately how old rocks and fossils are. 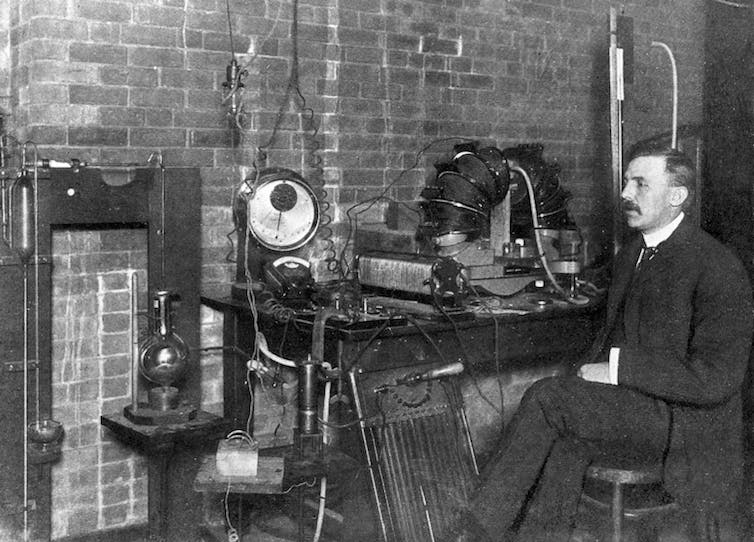 Ernest Rutherford at McGill University, 1905. Unknown, published 1939 in Rutherford: The Life and Letters of the Rt. Dear Lord Rutherford’/Wikimedia Commons, CC BY

The idea of ​​radiometric dating first came to a New Zealand scientist named Ernest Rutherford in 1904. His idea was to measure the number of uranium and lead atoms in a rock and compare them. He predicted that older rock would have more lead and less uranium than younger rock. 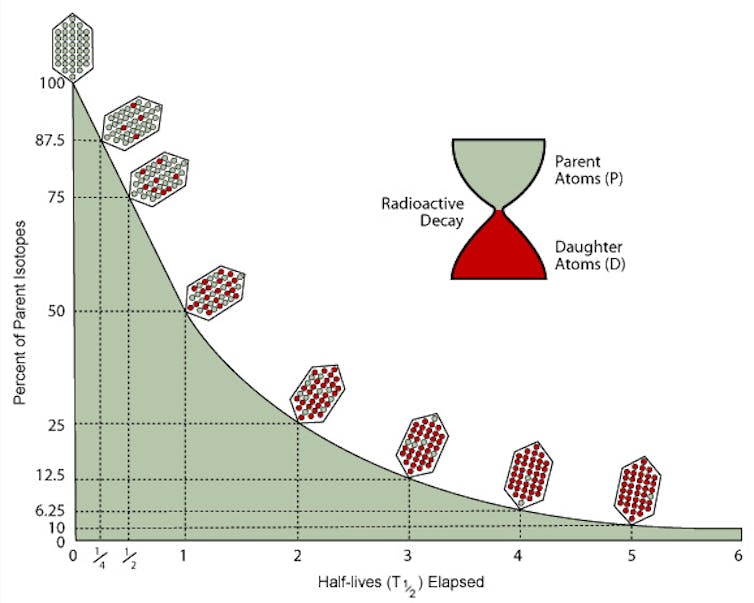 American scientist Bertram Boltwood tested Rutherford’s idea by measuring the amount of uranium and lead in various rocks collected from around the world.

Once a rock is formed, no new elements are added to it. So scientists can calculate how much uranium the rock started with by adding what’s left to the amount of lead that’s there now, thanks to the process of radioactive decay. Then, because they know exactly how long it takes for uranium to decay to lead, they can figure out the age of the rock. Boltwood proved that Rutherford’s idea worked, creating the field of radiometric dating in 1907.

The creation of Haikouichthys a fossil

Fossils are rocks. So scientists can use radiometric dating to estimate how long ago fossilized organisms lived on Earth.

Animals only leave fossil footprints under special circumstances. To be Haikouichthys to remain fossilized, their dead bodies would have to sink to the bottom of the water and be covered by sediments before microorganisms could decompose them. Then the minerals in the sediments would seep into the Haikouichthys their remains to be petrified.

An almost complete copy of Haikouichthys with a visible eye and zigzag muscle fibers called myomeres. This is one of many Haikouichthys fossils found in China. Dr. and Prof. Degan Shu, Shannxi Key Laboratory of Early Life and Environment Department of Geology, Northwest University

The age of the Earth is a 24-hour day

Scientists, using radiometric dating, estimate that the Earth itself is 4.5 billion years old. For a long time there was no life on Earth at all. Then microorganisms such as bacteria appeared. Only relatively recently did plants and animals begin to live on Earth.

Did Haikouichthys was the first fish or not remains a moot point. There are very few other fish-like fossils from the same time period. But paleontologists keep digging. Who knows, maybe in a few years they will find an even older fish-like animal to dethrone Haikouichthys as the oldest fish-like creature.

Hello, inquisitive children! Have a question you’d like an expert to answer? Ask an adult to send your question to [email protected] Please tell us your name, age and city where you live.

And because curiosity has no age limit – adults, let us know what you’re wondering too. We won’t be able to answer every question, but we’ll do our best.

This article is republished from The Conversation under a Creative Commons license.

Paleontologists have discovered a rare fossil belonging to a group of animals called Archeocyons, which means “ancient dog”: