Gordon Hall, view of the installation Go Back, document 2022

Shaped steel rod coated with modeling compound and pigment; two parallel strips of hand-dyed cotton joined by perpendicular strips with clasps. These material configurations describe separate sculptures by Gordon Hall: ‘Companion Stool (2)’ and ‘Two-Part Fold’, both 2022. Together, the artworks emulate the components of a commercial sex chair, ergonomically designed to enhance the enjoyment of coital activities . But these objects are not presented as a flat package with assembly instructions. Individually, they are just that: parts. Castrated by sexual action, they lay separated without apparent function on the floor of a gallery.

“TURN BACK,” Hall’s second solo show with Document, features eleven seemingly unfinished objects. Far from being unfinished or thoughtless, the surfaces of the objects are meticulously worked: finely sanded, legibly painted or carefully marked with drawing tools. And although the works initially appear scattered, they are carefully arranged to guide how viewers interact within the space. The pieces exude potential to be more than they already are; they show something else.

The formal resonance with the product prototypes underlies the temporary nature of the installation. Belt, 2022 — a cartoon paper belt colored in black pencil — looks like a mockup of an accessory. Similarly, the blocky torso of the 2022 ‘Horizontal Panel (Tank)’ evokes a sewing pattern. Adjacent to these couture offerings, other works refer to interior fixtures: “Turned Leg,” 2022, mimicking a Victorian cottage design, resembles a spindle ready to connect to a bed frame; coated in graphite and topped with a circular fabric sample pattern, the leg has a sketchy quality that undermines the solidity of its basic lathe-shaped form.

The body that uses these objects is implicit in this paraphrasing of wearables and furniture. Hall often makes objects for performances, responding and rearranging works over a period of time. This practice involves a history of object and performance epitomized by the afterlife of action-based art of the sixties and seventies. As a result of these time-based interventions, absent spectators and institutions clung to the physical debris: props, ephemera, photographs and video. This documentation replaces and even replaces live performance as artworks presented in galleries. The primacy of collateral over its performance has led to a critical reappraisal of what constitutes performance and, more broadly, what constitutes art. Positioning the ideas of conceptual art as paramount to the physical actualization of a work of art supports this twist: the work of art can be a thought. Here, on a LeWittian fulcrum, Hall seems to be arguing that performance-related objects do not need performance to constitute performance-related objects. In the present performance, no performance initiates the presence of these objects, and no activation is promised, other than the tacit positioning of the viewer as someone who acts around the work in space. In the absence of performance, what could be substitutes for these objects? 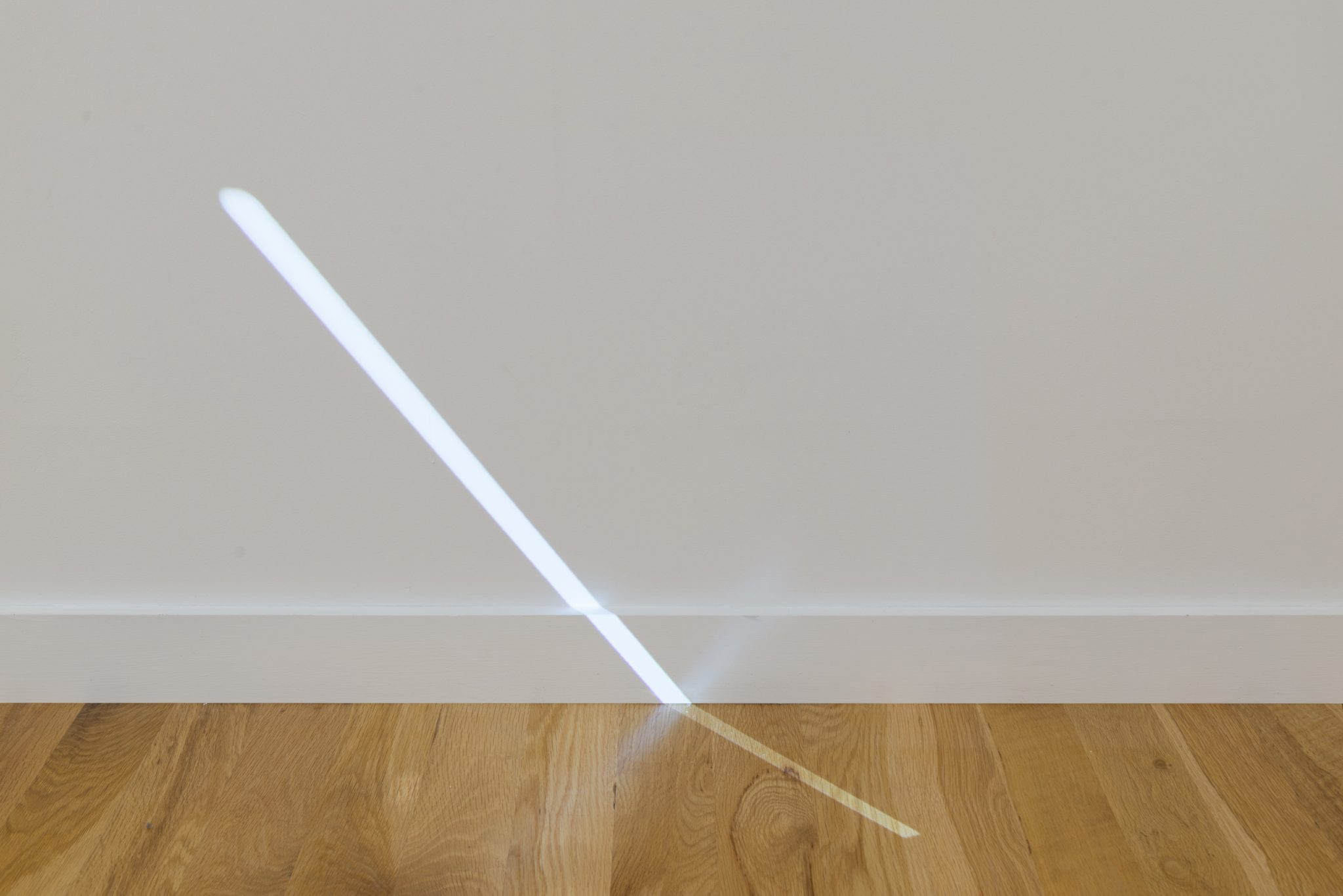 Gordon Hall, view of the installation Go Back, document 2022

Perhaps the works can be read as records of their own creation. Two artworks explicitly recall documentation: a photo transfer, “TURN BACK (Rubbing),” and a looping video projection, “March, 4:00 p.m.,” both 2022. In addition, the exhibition’s grisaille palette echoes sculpture paintings copied in gray scale. It is as if these works are artifacts of a process that has already taken place. As the exhibition title suggests, Hall’s work is aloof or a step back, grounded in the craft that precedes both the performance and the object. Marked by a medium non-specificity in which other media – painting, drawing, photography and video – are hidden behind the form of the sculpture, the objects suggest that they are still being filled. Positioned as remnants of studio practice, they become documents of an often overlooked performance: the work in progress.

TURN BACK is on view at Document, 1709 West Chicago, through October 29.